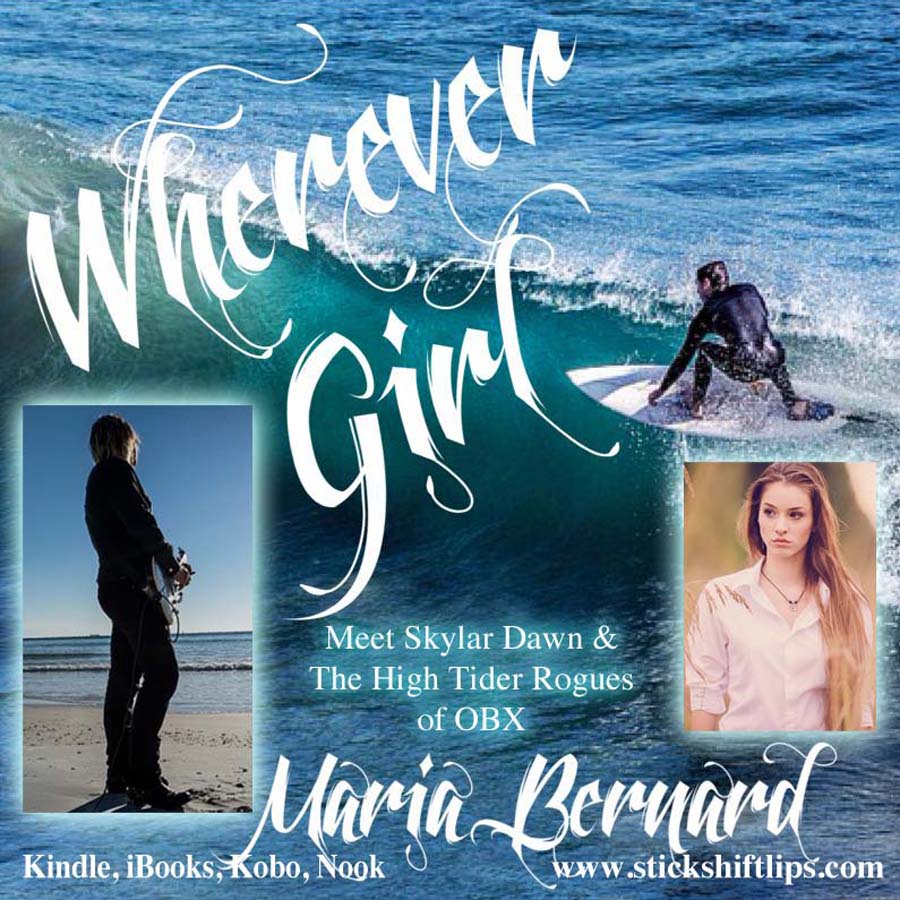 Since it’s Easter Sunday, and lets face it, besides turkey, we can expect a lot of sticky sweet desserts. So, I thought I’d share a snippet of sticky sweetness from by book, Wherever Girl.

If you haven’t read it yet, Wherever Girl is a surf-inspired rock star romance. It’s set in OBX, North Carolina. Sara, our heroine goes there on vacation. She has no idea who her B&B host is until she arrives to discover Skylar Dawn, local skirt chasing surfer/rocker is indeed the owner of the beachfront B&B. Let’s just say, Skylar takes his role as host way beyond the average call of duty.

***Warning*** Steamy Scene Ahead***
May cause you to have an unexpected but most welcome trip to your local ice cream parlor. Enjoy.

“Let me guess,” she giggled. “No trip to the Outer Banks would be complete without a visit to the local ice cream parlor.”
“Yeah, that’s right, now you’re getting it.”
“ R-uh-ee-t!” she burst out laughing.

“Vanilla?” Skylar repeated incredulously, after ordering his fancy ice cream in a waffle cone, a concoction of tropical fruits and coconut.

“I like vanilla,” Sara said as the freckled face teenager behind the counter shrugged and passed her the ice cream cone.

“I just find it incredible that out of all those tropical flavors, you chose plain old vanilla.” Skylar laughed all the way over toward a nearby picnic table, outside on the grassy patio.

“Vanilla, for many reasons,” she said with a sigh as she sat down beside him. She had always found it comforting, familiar and consistent. It reminded her of simpler times, innocent times before the harshness of reality stole into her world and robbed her of all those things, her parents, her family, her stability.

“Hey now, where’s your smile?” he asked, noting the slump in her otherwise perfect posture, and the tiniest hint of a quiver on her lips. “We’re having ice cream, remember?”

“You’re right. I’m sorry,” she said, snapping out of her melancholy thoughts. She traced her tongue around the edge of the cone in an attempt to salvage the fast melting cream.

“That’s better,” he said with a smile as he wrapped his lips around his own. “Want some?” he asked, catching her eyeing his exotic treat.

“I’ll try some,” she said, leaning forward as he held it to her lips. She lapped up a generous portion with her tongue, dribbling some down her chin.

“Oops, I’ll get that for you,” he said, leaning in and sucking the creamy goodness with his lips, catching it before it trailed down her neck.

“Oh, that’s so good,” she said, half-closing her eyes, feeling his hot sticky lips on her skin.

“It’s a lot better than plain old vanilla,” he said as he reluctantly sat up and took another mouthful of his ice cream.

“Don’t be so quick to dismiss the vanilla,” she said, all rosy cheeked, holding her cone to his mouth.

“Fine, let’s give it a try.” He gently pressed the cone back onto her lips, encouraging her with his eyes. She complied and took a generous portion onto her tongue. “Now, let’s see what all the fuss is about.” He covered her lips with his own. He then slipped his tongue into her willing mouth. “Mmm, so good,” he growled when he finally came up for air.

“Skylar…” she sighed, eagerly sliding up onto his lap, straddling him, careful to fix her skirt discreetly over her behind.

“Careful now, honey, we are out in public,” he gasped, feeling the heat of her arousal between her thighs.

“So what?” she asked, the hurt of rejection, evident on her impassioned face. “We’re not doing anything wrong.”

“No, not yet,” he said with an indulgent smile while pressing her hips into his obliging erection.

“We’re just having a little fun,” she said, looking into his eyes with a coy smile. “Aren’t we?” she asked, licking her quickly melting ice cream cone, then kissing him again while giving him a subtle squeeze with her thighs.

“I must admit, this vanilla is quite delicious,” he said, rolling his eyes backward.

“That coconut’s not bad either.” She pressed it to his mouth. “I wouldn’t mind another taste,” she said, biting her lip, watching him wrap his tongue around the ice cream and then hold it out for her to take. “So… good,” she said, leaning forward, taking his tongue between her lips and sucking it clean.

“Oh… fuck, that’s hot,” he gasped, dropping the remainder of the sticky mess in favor of her sugar coated lips.

“Skylar…” she chuckled, after a lusty round of tongue action, she’d never dreamed possible. “Your ice cream.” She pointed sadly at the fallen dessert.

“Forget that. We still have plenty of yours,” he said, holding the vanilla cone up between their mouths. With a suggestive wink and an encouraging nudge from his hips, he invited her to share what was left of the fast-melting ice cream.

“This is crazy good,” she said, steadying herself with a hand around his neck while her tongue flirted with his.

“It’s obscene,” he groaned, licking her lips faster than she could keep up. “We’re going to get arrested,” he chuckled, keeping his eye out for onlookers. “This is The South, after all.”

“Just blame it on your lusty inlander,” she said, repeatedly wriggling her hips into his throbbing hardness.

“Sara, honey… please have mercy,” he begged, his voice on the edge of desperation.

“Take me home, Skylar,” she whispered in his ear. “I want you inside me.”

“Honey, I don’t even know if I can move right now,” he chuckled, devouring the remainder of the vanilla ice cream, cone and all. “I don’t think I can wait until we get home,” he said, grateful for the fast approaching sunset.