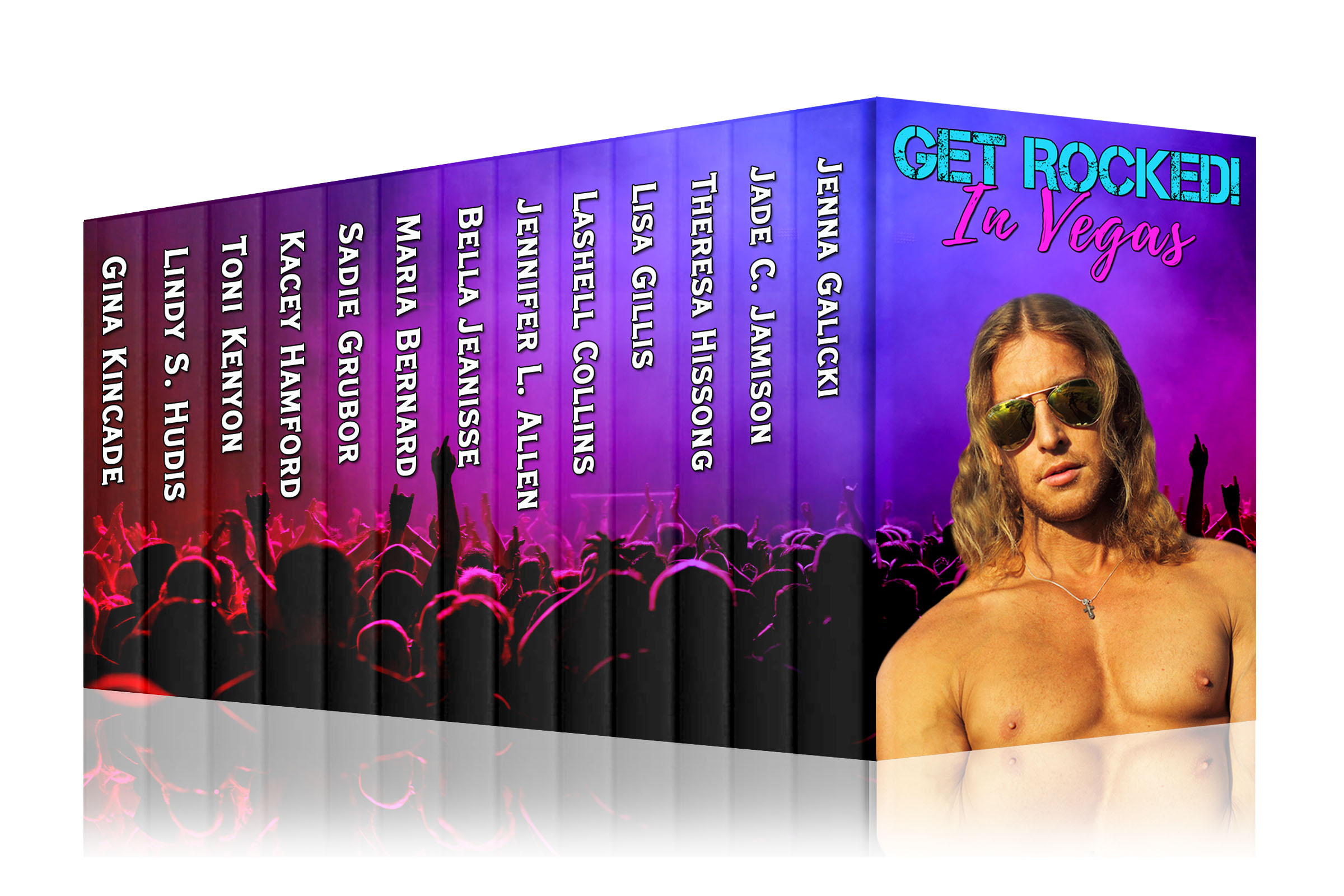 GET ROCKED! In Vegas showcases USA Today, Amazon Bestselling, and Award Winning Rockstar Romance Authors as they take you on a sexy musical journey through Sin City with a group of ***ALL NEW*** stories, many featuring some of your favorite fictional rock bands!

Let these scorching bad boy rock stars melt your panties and your hearts as they burn up the stage at a fictional rock festival in one of the world’s sexiest playgrounds!

Add it to your Goodreads TBR list, and read on for blurbs of each story and a GIVEAWAY. But first, sit back and salivate over this…

The Stage by Jenna Galicki
Even rock stars get star-struck. Meeting heavy metal icon Brandon Bullet was a dream come true for Tommy Blade. When Immortal Angel decides to add Tommy’s rock star idol as a guest singer to their set at the Get Rocked! festival, sparks fly and egos collide.
Angel Garcia, Immortal Angel’s flashy frontman, isn’t happy about sharing the spotlight or Tommy’s attention. That all changes once Angel has a mind-blowing rehearsal with the charismatic lead singer of Bulletproof.
The sexual chemistry on stage between Angel and Brandon is something Tommy never counted on. Now he’s forced to watch his husband and his idol strut on stage together and share a connection that, up until now, only he and Angel shared. And the guest appearance by Tommy’s rock star idol just lost most of its appeal. Commissioned to design custom-made rock and roll attire, even Tommy’s wife Jessi gets one-on-one time with Brandon Bullet.
Taking a back seat wasn’t on the agenda. Add Angel and Brandon’s secret rehearsals together, and Tommy is left in the shadows wondering exactly what’s going on between the two. Like everything else in Tommy’s life, it all unfolds on stage.
Epilogue by Brandon Bullet of Bulletproof.

Beating Hearts by Jade C. Jamison
If you thought Las Vegas was hot…
Brandon Bennett, inexperienced young drummer for a famous rock band, is about to play his first festival…but before that he needs to find out who’s stalking him. And, when he does, things just might get too hot to handle…

Guitar God by Lindy S. Hudis
Diego Ortega: The wild, sexy rock guitar legend with the raunchy strut, long onyx hair and dazzling soulful eyes. His renowned rock band, Medieval Steel, will be performing at the celebrated Get Rocked Music Festival in Las Vegas!
Diego has it all! A life in the fast lane, parties, booze, drugs, power and sex. However, the bright lights can’t erase the price he paid on the raw, lonely road to the top. Diego has rocketed to fame as his heart is starving.
His one and only soulmate, Susan, who has been his constant companion and true love, will become a permanent fixture in his life. Unbeknownst to her, he plans to present her with a Cartier diamond engagement ring.
Fates collide. As the music blasts to a climax, one deranged and obsessed fan and her secret, rage filled vendetta will trap each and every one of them in its sudden, murderous heat.

To celebrate the Get Rocked! In Vegas set, we’re giving away two high dollar iTunes gift cards so you can spin your own sounds and party like a rockstar, baby! Enter to win right here!

And to keep the party rockin’, join our Facebook Event where we’ll be parting from now until release day.

Spin the wheel, roll the dice. There’ll be games, contests and prizes to be won. ‘Cause that’s how we high rollers do it in Vegas!