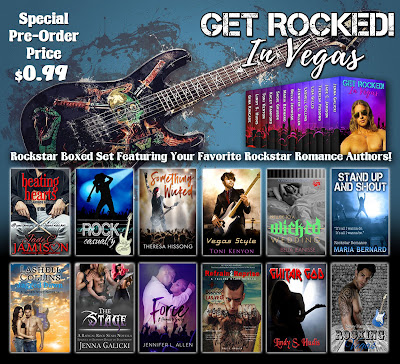 GET ROCKED! In Vegas showcases USA Today, Amazon Bestselling, and Award Winning Rockstar Romance Authors as they take you on a sexy musical journey through Sin City with a group of ***ALL NEW*** stories, many featuring some of your favourite fictional rock bands!
Let these scorching bad boys rock your world and melt your hearts as they burn up the stage at a
Fictional Rock Festival in one of the world’s sexiest playgrounds!
Get Rocked! In Vegas: Rockstar Romance Limited Edition Collection – by Jenna Galicki, Jade C. Jamison, Theresa Hissong, Lisa Gillis, Lashell Collins, Jennifer L. Allen, Bella Jeanisse, Maria Bernard, Sadie Grubor, Kacey Hamford, Toni Kenyon, Lindy S Hudis, Gina Kincade.
The story behind my contribution to this awesome Boxed Set!

Stand Up and Shout – A tale about Kicking Fear in the Ass and Claiming your Destiny!

Let me start by saying that if it were not for this Boxed Set, this story may never have come to light. I had very happily put the SSLs to rest. I left the series in a good place and I was quite okay with moving on to other projects. I’ve had readers ask if I was ever going to write more about the SSLs and even though I wavered, I was actually quite convinced that I would not. That said, I am very glad I did. Turns out, I missed these guys and I was very happy to be re-united with the coolest band ever… The Stick Shift Lips. 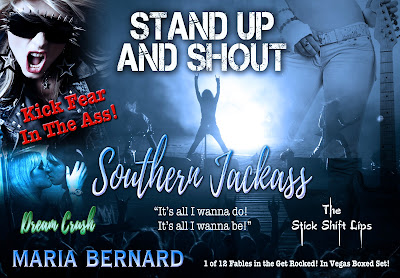 First an Excerpt:
“I can’t deal with that punk today,” Ashton groaned, resting his head, making a pillow of Chloe’s breasts.

“Ashton, I’m sure Jay feels just as awful about it.”

“Why the fuck do I care? Why do I even bother?”
“Because deep down you still believe in him. And so do I. I’ve seen him perform. I’ve heard him sing. You have a gift for recognizing true talent and I believe in you more than anything.”
★ ★ ★ ★ ★
Go on, ask me what it’s about.
Alright, I just tell go ahead and tell you.
“It’s about kicking fear in the ass and claiming your destiny. It’s about following your instincts and never giving up on what you know to be real.” – Maria Bernard
If you’ve read my Stick Shift Lips Series all the way through, you’ll remember young Southern Jay from Dream Crush, LA Summer. Poor Jay, he went through the ringer in that story. But no worries, Ashton Wright, frontman of my headliner band, lovingly referred to as the SSLs by readers, took a real liking to Jay and recognized the true talent behind the stage fright. Others may have given up on Jay, but not Ashton. He’s taken him under his wing for the last few years. Now, hopefully, all Ashton’s hard work and mentoring will come to fruition when he takes a giant leap of faith and signs Southern Jackass (Jay’s Fledging band) up for a huge rock festival in Las Vegas of all places! Suffice it to say, Jay is scared shitless! But not that he would ever admit it out loud.
Worst part is, Southern Jackass is slated to be opening band to take the stage on Friday afternoon at the Get Rocked Music Festival! ► O…M…G!!!!
What-the-what????
Now the real question is, will Jay freeze up again like that tragic night in LA? Oh, and did I mention that not only will the world be there to watch him sing and possibly make an ass of himself, the entire band of the ultra-successful Dream Crush ► Sofia, Jet, Jack and Paul will be there too!
Trust me! This is a nightmare for Jay. The pressure is on! Not only for Jay, and Ashton, but for Jay’s band, Southern Jackass. Alex, bassist, and Luke, drummer are about ready to kill Jay. Thankfully, Jay’s got an angel on his side. Enter Alice Electra, gifted guitarist who isn’t afraid to kick Jay in the nuts to get the job done! 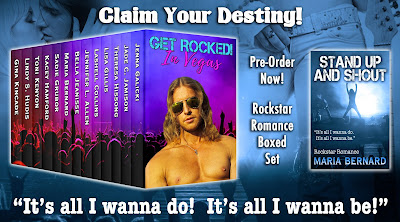 “It’s all I wanna do! It’s all I wanna be!”
Gifted up-and-coming singer, Jay Sharp is destined for rock star greatness. Problem is, he suffers from crippling stage fright. Despite countless chances to prove himself, and tireless encouragement from his famous mentor *Ashton Wright of the Stick Shift Lips, Jay freezes every time he is in the spotlight.
Alice Electra is an amazing guitarist on the run. Fate leads her to *Southern Jackass, Jay’s struggling rock band. She is offered a chance to shine.

Right away, Alice and Jay form an unshakable bond. Together with their fledgling band they face a challenge greater than ever. Failure is no longer an option. To succeed, they must kick fear in the ass!

So, what are you waiting for? Get Rocked in Vegas Boxed set is available for 99cent for a limited time only.
Do not hesitate! One-Click Today! 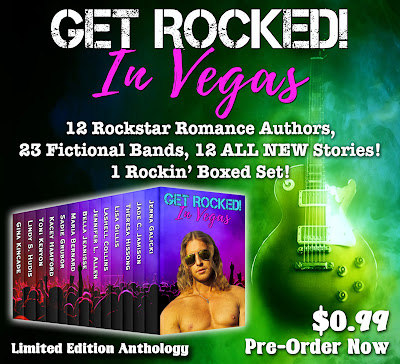 Before you go, Check out this awesome Video!
Like and/or Comment on our kick-ass Trailer by Theresa Hissong. Thanks to 5 Stories for the use of this great song!

Hold on, what’s your hurry? We’re not done yet.
Please, join us on Facebook for more Get Rocked In Vegas!
FACEBOOK PAGE
FACEBOOK EVENT
Okay whew~ Now we’re done… For Now 😉
But hey, you’re welcome to scroll back up and do a re-read.
Oh, geez, I almost forgot to remind you all to join me in
Rockstars Among Us Book Club.
As always, thanks for reading!
This site uses cookies. Accept To find out more. Read More
Privacy & Cookies Policy