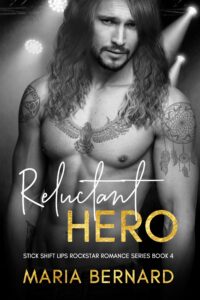 She is his biggest fan.
He is her ultimate hero.

What is it they say? Never meet your heroes, you’ll only be disappointed. Well, Kayla Reynolds learned that lesson the hard way.

Synopsis: Jamie Gale, the wild and unhinged drummer for the local rock band the Stick Shift Lips, is a self-confirmed bachelor living the rock star life to its fullest. A guy like him doesn’t have time for starry-eyed fangirls like Kayla. Girls like her expect too much and he just isn’t that way inclined. No way, Jamie prefers enjoying his fame with the multitudes of uninhibited groupies of who’s favours didn’t require more effort than a wink of an eye.

When his callous rejection of her at a meet and greet, sends her into the awaiting arms of an opportunistic sexual predator, in the guise of an up and coming rock star, poor Kayla finds herself in a heap of trouble.

Will Jamie get to her in time to be her real life hero? Will he finally put aside his lone wolf status and risk falling in love with his suddenly broken and bruised, biggest fan?

Love SSL!!! – I loved this book as much as the rest of the series. The characters keep getting better and their lives more wonderful. This is an outstanding achievement for Maria Bernard and I look forward to all the books to come. I love these guys!!

I loved this book! – I’ll admit I wasn’t sure about Jamie Gale in the first books in this series, but after getting to know him more as the series progressed, I have to say he is a close second to my favorite Stick Shift Lips member, Nick Arrow. he really rose to the occasion in this book and made me realize how awesome he truly is. What a man! This series is the best rock star romance series I’ve read. I find myself missing these characters sometimes and have to re-read the books all over again.

HE IS A GALE FORCE! – Poor unsuspecting Jamie Gale is about to fall in love! No one in his circle of friends could imagine it yet in a sad and violent circumstance it happens. Kayla has been a fan of the band for many years but her favorite has always been Jamie. She is finally going to meet him and get some things autographed but in a bad turn of events she is crushed when he blows her off. She is approached by another band’s singer who ends up physically abusing her as she struggles to get away. He literally throws her out of his van and drives off. But Jamie happens to find her and takes her to the hospital. The rest, as they say, is history! THIS IS NOT A BOOK OR SERIES YOU’LL REGRET READING!!

Ready for more?
Check out the next in series!
Dream Crush, LA Summer