From Dan’s Music shop in A Dream For Winter to Dave’s Music Shop in Joy and Sorrow, I used this place as a visual reference in my imagination. 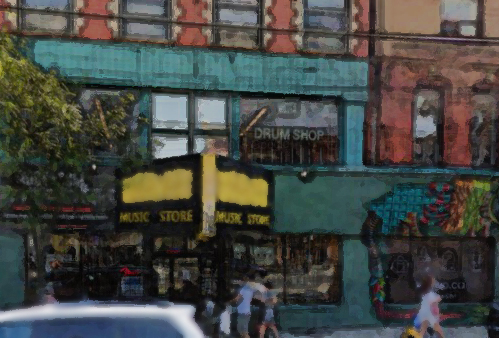 Many an afternoon was spent here, mooning over musical instruments, and people watching. Awesome, inspiring energy in music stores. You see all types of characters coming and going. Each with his or her own dreams of making it big (even if only in their imaginations.)

Along with art supply shops, music shops are some of my favourite places for inspiration. Where are some of yours?

The following is an excerpt from Joy and Sorrow that takes place in a such a shop:

Darien entered the music store where she worked and immediately sought her out. There she was… his Faith. Well, not quite his yet, but hopefully soon. How long had it been? Two, three weeks since Darien first set eyes on her? It had to have been fate that led him to wander into the violin department of Dave’s Music Shop on that particular afternoon.

What else could it have been? It’s not like he knew anything about violins, or had any interest in classical music. No, in fact, Darien was first and foremost a guitar player — specifically the electric guitar, and it would be obvious to anyone who observed his eccentric looks and style of dress that Goth music was his genre of expertise.

“Are you lost, sir?” she asked with what was the cutest most adorable smile that Darien had ever seen.

Completely caught off guard, he was stunned speechless by her unexpected loveliness. Unfortunately, she mistook his immediate lack of response as personal offence and as a result, her shy smile turned into a frown of self-doubt.

At that very moment, Darien realized that his life had changed forever. From that day forward, it would be his personal mission in life to banish all but smiles from her adorable face.

“It’s just… oh, I’m sorry… I didn’t mean to um, insinuate that you…” she fumbled, nervously chewing her bottom lip.

If only he could find his voice, he would reassure her that she had in no way offended him, but as it was he could only stare helplessly at her heart shaped face, her huge doe eyes and those most mesmerizing pink lips.

Faith was mortified! She hadn’t meant to offend him. It’s just that he looked so out of place standing there in the violin section of the shop. Now, what? What if he complained to her boss? She really couldn’t afford to lose her job. She was still relatively new here and offending customers was the last thing she wanted to do. Musicians could be such a sensitive and temperamental lot.

Faith was a painfully shy introvert. Sometimes, she used humour to detract from her bashfulness, but unfortunately, not everyone understood her quirky sense of humour. In fact, it had gotten her into a few awkward situations in the past.

Yet, she couldn’t help herself. When he just stood there gaping at her with the clearest, most remarkable green eyes she’d ever seen, she kept going, digging herself further into a whole lot of trouble.

“I mean… with your, um… hair, and dark clothes. Well, you don’t exactly look like the classical music type. I guess I just assumed you were lost.”

Black, his hair was black like coal. It was long, past his shoulder blades, parted in the middle and severely straight-ironed.

“Yes…” he managed to whisper, staring into her dark eyes. “I seem to have gotten turned around.” Faith literally sighed with relief, realizing he hadn’t gotten offended. She was grateful her assumption about him being lost had been correct. “Guitars…” he continued, feeling like a complete ass. “I’m looking for the electric guitars.”

“Oh, they’re back that way,” she said, pointing in the direction from which he’d come.

“Oh, yes right, of course. Thank you.” He started to turn but hesitated before quietly asking. “Your name?”

“Faith, my name’s Faith. I’m new here,” she said with a shrug and a smile.

“I’m glad, I mean Darien,” he said, feeling the blood rush to his head. He was making a fool of himself yet he couldn’t help it. “My name is Darien River.”

“Uh… okay well, nice to meet you, Darien River. If there’s anything you need, just let me know,” she offered, looking unsure. “I mean, I don’t know much about electric guitars just yet but I can ask one of the other clerks for you.”

He nodded politely. “I’ll be fine. Thanks for watching out for me,” he said with a handsome smile. He bowed his head as he retreated into the familiar territory of the shop, but not without one last lingering glance in her direction. She stood there watching him, in case he got lost again. She gave him an encouraging smile and a slight wave of her fingers.

Copyright 2015 by Maria Bernard. All rights belong to the author and material may not be copied without the author’s express permission

Unauthorized use and/or duplication of any material from this blog without express and written permission from this blog’s author and/or owner is strictly prohibited. Excerpts and links may be shared, provided that full and clear credit is given to Maria Bernard with appropriate and specific direction to the original content.